the sitting on a cushion, accession to the throne

one who earns nothing

Home / Blog / Word-Builders: The Other ‘Jaa’ in your Vocab

Word-Builders: The Other ‘Jaa’ in your Vocab

Each ‘place’ in her body was heart-appealing

All over, the heart is all over; befitting!

As odd as it may sound, the smallest piece in a puzzle is often the most central to its coming together. It’s also the one that takes the least space and eventually can’t find its place on the maze, at all!

On the maze of words too, there are tiny pieces that we move here and there every day, but fail to realize how big a part they play in solving the puzzle of our speech.

In this blog, we’re going to give that sad story a happy ending, and will help a word find its true place in our word stock!

So, the word in focus for today is ‘Jaa’, meaning place, room, or time.

Oh, don’t mistake it for the imperative of the Hindi verb ‘Jaanaa’ that means to go, as in idhar jaa, udhar jaa.

‘Jaa’ is a great word to start reckoning our language’s rich word-building ability. Here are a few words that we’re all aware of, but also aren’t that ‘Jaa’ is at the heart of all of them:

Literally meaning ‘in place’, it means appropriate, or correct; as in ‘Ba-Jaa Laana’ – to serve well, to execute properly. Quite common is the phrase ‘Ba-Jaa farmaaya aapne’, i.e., you rightly said.

Interestingly, Ba-Jaa also compounds to the phrase ‘Ba-Jaa-e-…’, meaning instead of, or in place of; as in, ‘iski bajaa-e- usko’. Marked with an Izafat, it’s actually among the few words that Urdu has given a new lease of life to, beyond the constraints of grammar!

Contrary to ‘Ba-Jaa’, Be-Jaa means out of place or inopportune. The word also has more negative connotations like outright wrong, and in some cases can even mean extremely/excessive (wrongdoing).

Though in Mir’s couplet above Be-Jaa has been used in its literal sense, the other meanings aren’t too Be-Jaa either!

Translating into ‘place-to-place’, this tricky compound means ‘here, there, and everywhere!’ What’s interesting about this word is that it can have positive meanings such as ‘omnipresent/everywhere’, but also negative ones such as ‘displaced/scattered/unsettled’.

So, choose your context wisely, else you too could be ‘Jaa-ba-Jaa’ – all over the place!

‘Giir’ is the imperative of the Persian indefinite verb ‘Giraftan’, one of its many meanings includes seizing, holding, possessing.

Thus, ‘Jaa-Gir’ could be a verb, that is holding a place, or could also be a noun meaning a possession/estate.

That’s why we use the term ‘Jagir-Dar’, denoting a person who holds an estate – a rare case of nouns redoubled!

Daad is a strange word. Just take a look at its range of meanings: praise; justice; complaint; oppression; and, the one that’s most relevant to us – ancestor(s).

‘Jaa-e-Daad’ means a place held by ancestors. Thus, connoting expressions such as inheritance or legacy.

But also feel free to club the different meanings of Daad with Jaa; i.e., with justice – ‘place of justice, or court’, and so on; just to evoke the more queer side of the word!

Similar to Jaa-ba-Jaa, Har-Jaa also means everywhere, but the word can give away some negative impressions, too.

For instance, it’s subjective-noun form ‘Har-Jaaii’, which does mean a person who is everywhere, but also means one who does not commit to one place, therefore evoking meanings such as Be-Wafaa, an infidel, or an Awaara, a vagabond.

Our beloved ‘Jagah’, was originally ‘Jaa-Gaah’.

Just like ‘Jaa’, ‘Gaah’ also means place and time, but with the two coming together, ‘Jaa-Gaah’ came to mean not a place, but position.

With all that in place, it’s a wrap. If you have more “Jaa+” words to share, Mind the Space Below! 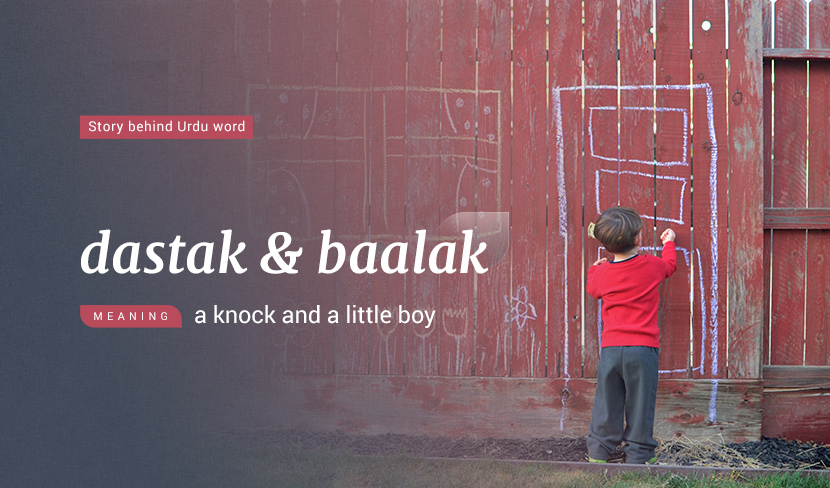 The Strange Connection between Dastak and Baalak

Baalak (Baal + Ak), thus, means a little Boy or ChhoTa Bachha and Dastak (Dast + Ak), although it means a knock at the door.